Two's Company, Three's a Crowd, and Eleven is a Chess Fest

by Bob Lenning
A new record for Saturday attendance at Panera was set yesterday when 11 players pushed the wood! The regulars were there including Nick, Bob L. Jerry, Andrew L., Andrew P., Stephanie, and Darren. James Whiddon came in the afternoon to get his hat back in the game. Brand new players included Michael and Beth Harper, and Maria Judy. Also sticking their head in to say hello was James Osborne. Now if the temperature would soar to 75 so we could play on the tables outdoors .....
at 1:01 PM 4 comments

Chess is a Blitz

by Bob Lenning
Judit Polgar won game 4 with the white pieces against Gregory Kaidanov in the last round of their Sicilian theme match at Hilton Head. Find the game scores here. Now it's on to a blitz challenge to break the tied score.
at 10:07 PM 1 comments

by Bob Lenning
Gregory Kaidanov won with White against Judit Polgar's Sicilian Najdorf to take the lead in their theme match 2 wins to 1. Download the latest game score here.
at 11:35 PM 1 comments

Kaidanov and Polgar Win with White

by Bob Lenning
World 46th ranked Judit Polgar faces off against Kentucky's own grandmaster Gregory Kaidanov in Hilton Head, SC this week for a 4 round Sicilian theme match. After 2 rounds the score is even. Kaidanov explains his feelings during game 1. Judit's sister Susan Polgar annotates game 2. Get the official game scores as a PGN file at TWIC.
at 2:14 PM 0 comments

Who's Afraid of a Ground Hog Shadow?

by Jerry
Bob failed to report that Steff presented him with a unique "Chess Blanket" to ward off the next cold spell. So to answer the question of "Who's afraid of a ground hog shadow?" .... it isn't Bob!
at 2:15 AM 2 comments

by Bob Lenning
Six players had three boards blazing at Panera Bread this morning. Jerry, Darren, Andrew P., Steph, Andrew L., and Bob L. were on hand. The coffee was good, the chess was great, and all had a good time.
at 11:59 PM 0 comments

If It's Tuesday, It Must Be Chess

by Bob Lenning
Steve Parsons and Joe Farrell took 2.5 points to split the win at the 2nd Tuesday Tournament for February (rescheduled from last week). The performance keeps Steve in the lead for the championship with 5.0 points in 2 tournies, and Joe Farrell is close behind with 4.5 points. Johnny Owens and Ernie Weaver each scored 1.5 points to bring their 2 month totals to 3.5 and 2.5 points respectively. A half point each for Jerry Weldin and Kerry Fatula keeps their hand in at 2.0 and 1.5 for the total. Andrew Lee pushed his provisional rating to 1335 with an impressive 2 wins against strong opponents, giving him his first championship qualifying points! Find the full crosstable here.

Don't miss next month's 2nd Tuesday Tournament on March 9th. Also, check out the new pages featured on the menu items at the top of the blog page where you'll soon find current championship standings posted.
at 1:20 AM 1 comments

You may have checked out Chess.com and found it lacking in features for realtime chess. And you may have checked out the popular ICC that is so talked about only to find that you'd have to dip into your credit card again. (The ICC is highly recommended by some of our club members.) Try the free and full-featured alternative, the Free Internet Chess Server.

To use FICS you'll want to download free client software. Try Babas Chess for a free and full-featured interface. Then just register with FICS for free and start playing live realtime chess online.

Want to go beyond the standard chat feature and talk to your opponent as you play? Try the popular Skype application for free voice or video calling while you play online.
at 4:52 PM 0 comments

by Bob Lenning
The 10th Chess.com tournament is coming soon! As usual, play will be in 200 point rating sections. Pairing is in groups of 6 yielding 10 simultaneous games, 5 as Black and 5 as White. One winner of each group will advance to the next round. The action will begin on March 1st, so sign up now!
at 2:59 PM 0 comments

by Bob Lenning
Check out our new Event Gadgets on the righthand side of the blog. The upcoming club events are featured with the ability to keep track of members planning to attend.
at 7:58 PM 0 comments

by Jerry
Alexandra Kosteniuk has made good on her promise and has added a link to our Blog on her Blog site. Now I can "toggle" between my two favorite sites!

It appears that tomorrow will be another "snow day", a great day for exploring the chess resourses available on line.
at 12:57 AM 1 comments

by Jerry
ECTC is closed today due to the weather; consequently there will not be a meeting/tournament tonight.

I just got off the phone with Johnny Owens; we will hold the February Tournament next Tuesday the 16th of February...weather permitting!
at 9:05 AM 0 comments

by Bob Lenning
Bob L. recently scored the biggest upset so far in an unrated thematic King's Gambit tournament by besting Aleph (rated 2086 when the tourney began). Games start with the basic King's Gambit position, but the Black player then decides whether to accept or decline the gambit. The tournament is unrated in order to encourage players to sign up and try unfamiliar lines. See the game with Fritz analysis after the fold.

How To Improve At Chess?

by Jerry
Lately I have been asked by at least four different club members to help them improve their game. While this is very flattering; I feel that I am the last guy to ask considering that my rating goes up and down more often than the elevators in the Empire State Building.

by Bob Lenning
The Winchester Club has challenged us again to a 5 board match. Take this chance to support the club and sign up here to join the battle.
at 4:40 PM 1 comments

Even Carlsen Loses to Basic Tactics

by Bob Lenning
Today's emphasis on tactical training might seem a drudgery to some. The thinking is that most games between club players are actually decided by simple tactics, not opening knowledge or endgame technique. And so the study and practice of tactics can often bring the greatest results in chess improvement no matter your strength or weakness in that part of the game. But still, some don't believe.

Check out this recent game from Corus 2010 pitting Magnus Carlsen against Vladimir Kramnik and you'll see that even at chess' highest levels, this rule can still hold true.

Carlsen returned to the place where he first burst onto the international scene with his win in the C group of Corus in 2004, earning him his first grandmaster norm. This game was played in the 9th of 13 rounds. The two players reached this materially even position in the game featuring the Open Catalan system. 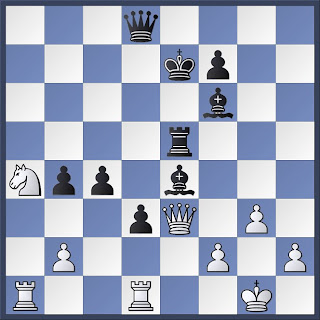 Carlsen has let his opening edge dissipate into a probably equal but certainly foreboding position, but all seems safe. Or is it? Fritz recommends 35.Qf4 with a dead even evaluation. But Carlsen falters and uncorks 35.Nb6 ??, perhaps believing that he can snatch the pawn on b4 and stop the passed pawn on the e-file. Can you see the simple tactic that refutes Carlsen's move? 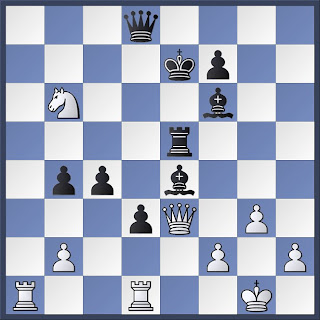 Kramnik unmasks an attack to decoy the queen off the diagonal, remove the defender of the newly placed White knight, and force this finish to the game:


Nevertheless, Carlsen held on to win the tournament. But what Dan Heisman wrote in his Best Novice Nook Ideas applies here as well as in your own games: "basic tactic skills should be used to prevent an opponent’s tactics, not to find winning tactics for oneself!"

Check out Kramnik's own analysis of the game at the official tournament site.