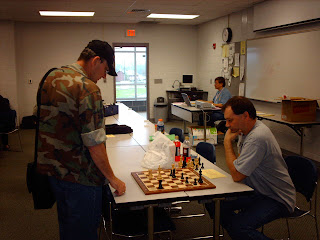 The proposed Club Constitution has been approved by a vote of 12 for, with none opposed; a copy will be e-mailed to all members.

The Club bank account has been opened with the $100 donation from Doug Goodman and J.J.Duvall; received at the Bluegrass State Games.

The next order of business is to fill the offices of Vice-president and Secretary; volunteers are preferred. Remember we will have elections in November so you would only need to serve until then.

We also need librarians; Ernie has completed the inventory and the library will be open for business at the 3 August meeting.

Lastly, the issue of dues. I propose that the Club initiate the collection of dues at the rate of $12.00 per year with a "Life Time" membership set at $100. Aforementioned dues would intital the member to "free entry" in all "Second Tuesday" USCF rated tournaments. Life Members would be "paid up" for all "Second Tuesday" tournaments and receive an additional $5.00 off the entry fee in our annual Spring tournaments. As Dave Brock requested this membership option; if approved, his card will be numbered 0001.

It was good to see Dave back at a meeting; he committed to attending even after his move to Cave City.

Kerry and Nick have returned from vacation and were hungry for chess; Dave and I tried our best to oblique them with Bob K. jumping in after Nick left. There was lengthy analysis of two games which seemed to bring as much enjoyment to the players as the actual games.
at 11:23 AM 1 comments

by Jerry
Every tournament night there is a stampede to the TD table to get score sheets. Click on one of the links here and down load your free score sheets.

PS - Put some score sheets in your chess bag with a couple of pens and pencils and don't forget that you can print both sides of the paper.
at 8:19 PM 0 comments

Randas Burns Up The Boards 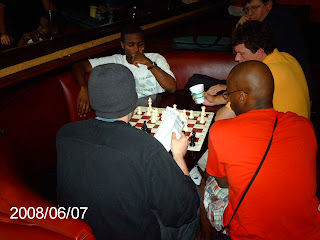 Randas Burns (in the white shirt in photo) won the Bluegrass State Games Chess Open with a perfect four out of four! Our own Steve Parsons was also undefeated with a score of 3.5; for 2nd place. Johnny Owens and Ernie Weaver shared 3rd place with Glen O'Banion by scoring 3 wins out of 4.

Bobby Amback, past Tuesday night visitor and recent blog commentator tied for First in the Quick Tournament with Raysean Whitney with a score of 7 out of 8.

The Games have been posted by USCF.
at 8:40 PM 0 comments

A Tactical Win From The Bluegrass 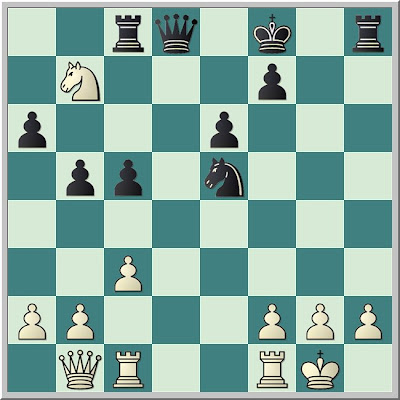 The position above is from Hunt Vs Weldin, round #2 of the Open Section 2010 Bluegrass Games. It is Black to make his 20th move; find the move I had forseen on move 17. You shouldn't need more than 30 seconds; take a hard look before checking out the game score below.

Three For Three In Bluegrass Quick 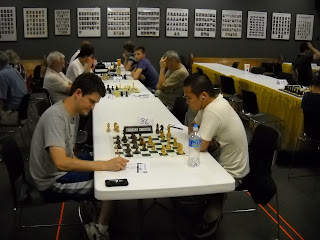 All three Club members entering the Quick Tournament finished with metals. Gelvic Cubar (on the right in photo) went 5 out of 8 to take home the Gold in the Young Adult Category, Jerry Weldin scored 5.5 out of 8 to take Gold in the Senior Division, and Steve Parsons scored 4 points in route to collecting the Bronze in the Adult Category. Jerry, who we all know hates draws had the distinction of being 1/2 of the only draw in the entire Quick Tournament!
at 6:54 PM 0 comments 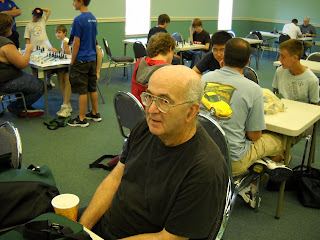 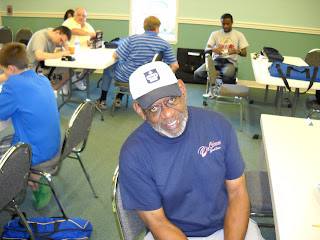 Clany Soileau (top photo) and Andrew Preston (bottom photo) proved that chess players like good wine improve with age. Clany took the Overall Gold Metal in the Beginner Section; while Andrew won the Senior Gold Metal. Forget pacemakers and hernias; let's get it on! Way to go guys Springfield and Bardstown should be proud.
at 6:13 PM 1 comments 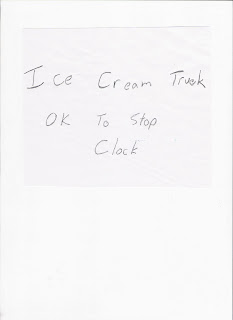 Going "by the book" does not always work. If it did we wouldn't need a Supreme Court to interpret the rules/laws of our land. Sometimes you need to apply "common sense" to a situation...so what do you do when you have a house full of kids playing chess and the Ice Cream Truck arrives...?

It may not be in the Rule Book; but it should be...at least now we have a precedent for future situations on a hot, humid day. A big "tip of the hat" to Mr. Dillard!
at 11:21 PM 1 comments 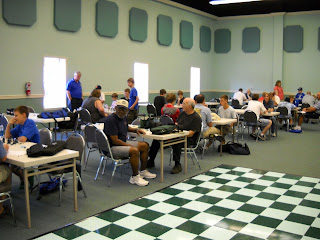 Here's a quick overview of the 2010 Bluegrass Games; I'll try to touch all the basis here then follow up with specifics later.

There were over 60 players in all in addition to the Junior KY Championship combatants.

I don't know everyone who won metals because the majority of the awards ceremony's were conducted next door at the Ladies Ministries Canteen as sections finished. I do know that overall the Club took home some top prizes to include at least 3 Golds.

Prior to the actual start the Club received a donation of $50 each from Doug Goodman and J.J. Duvall who are running for office this year. J.J. is a candidate for Mayor of Radcliff and Doug is running for Magistrate of the 2nd Hardin County District.

Thanks to all the Club members who turned out in support of this Club hosted event.
Additionally as President I'd like to thank the following folks in no particular order:
Barry Saylor, owner of the Radcliff Subways, for generously donating 12 free 6 inch sandwiches and 20 drink coupons which were given to the folks who did the "heavy lifting".

Johnny Owens and Steve Parsons who provided the "heavy lifting" Friday for set-up.

Denise Emberton who was our "Gal Friday" overseeing the Scholastic events, posting pairings, recording results, while being mother to three of the participants. Someone like her undoubtedly inspired that song about "winning the bacon and frying it in the pan".

Debbie Owens and her ladies who ran the "Canteen" next door for the tremendous amount of work in setting up and keeping the players supplied with food and beverages throughout the day. You had to be there for set up and tear down to really appreciate their efforts.

Steve Dillard for being the Tournament Director and Ice Cream Truck Coordinator; the kids loved it. (Story later)

Bob Kilmer, Gelvic Cubar, Johnny & Debbie Owens, and Steve Parsons for staying and helping break down and clean up. (Bob I have your Free Subway Coupons-see me next meeting) Also several out of town players lent a helping hand and regrettably I didn't get their names.

The KY Junior Championship is still in progress; they were playing "Game 90/5" and only got in a couple of rounds; watch the KCA web site for results when they are finished.
at 3:14 PM 0 comments

Show Me The Money! 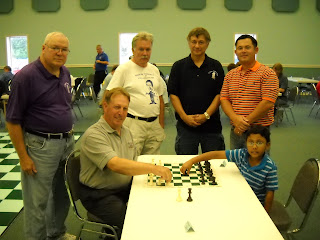 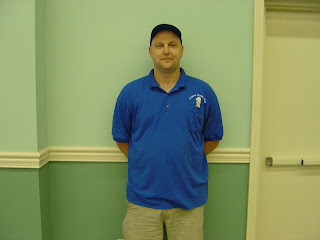 Steve Parsons has offered his services as Club Treasurer and I have taken him up on his offer! A former math teacher who is currently employed by a credit union is all the credentials he should need; but I know him to be honest, straight forward, and a compassionate family man. You learn a lot about a person if you share a ride to Winchester and back.

Steve's first official act was to receive a check in the amount of $100 from Doug Goodman and JJ Duvual candidates for Magistrate of the 2nd District and Radcliff Mayor respectively.
at 1:01 AM 0 comments 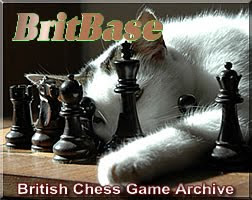 Darren left his cat's to play alone as he took time from his vacation to renew old acquaintances at the Club last night. Steve P., Johnny, Gelvic, Nick, Ernie, Kerry, Sal, Rudy, Dave, and Jerry were also in attendance.

It was good to see Dave back again; Dave is planning on a move to Cave City in the near future but says it won't stop him from supporting the Club.

Kerry took me to task for not reporting that he had held Johnny to two draws prior to playing Steff last week. Kerry and Nick will be on vacation next week and may run into each other as they are both from the same county in Pennsylvania.

Again, it was great to see Darren and Dave again; both plan on playing in the Bluegrass this weekend if you missed them last night.
at 5:16 AM 0 comments 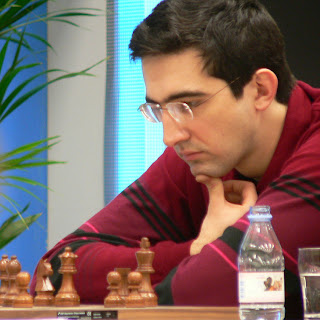 I can guarantee that Kramnik will not be at the Bluegrass Games; so now what is your excuse?

Click on Bluegrass Games on the calendar to your right for complete info and map.
at 7:49 PM 0 comments