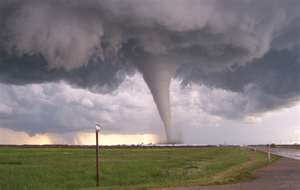 In addition, Amy Nunn and James Whiddon played an unrated ladder game that ended in a draw!
at 11:18 PM 0 comments While some don't need to leave home to get their "Chess Fix" most of us prefer to square off face to face over the board.

Tuesday night saw eight combatants marshaling their armies over the 64 square battle field. I only know of one rated game; an important one for our first time visitor James Pittman, who played his first USCF rated game after Johnny went on line to secure his USCF membership. Bob Kilmer proved a worthy opponent in James P's baptism by fire and graciously reviewed the game after winning.

Another milestone occurred as for the first time (other than a tournament) the Club was graced by two lovely players of the fairer sex! I think I speak for everyone when I say that I hope this trend continues.

No ladder changes occurred to my knowledge. For the record the attendees were: Amy, Stephanie, Bob, James P., James W., Jerry, Johnny, and Rudy.
at 10:51 PM 0 comments

A Comedy Of Errors

Johnny asked for games from the April Fool's Tournament. Here are my comments on the above game:

4. ...a6 Black deviates from the normal Nf6 and gives White a free move.
7. ...Be7 if Black was going to retreat why check and allow White to develop another piece?
8. ...Na5? violates opening principles by moving the same piece twice and placing a "Knight on the rim". d6 or developing the King Knight was called for.
9. Bxf7+!? I felt that this sac was justified because Black was sadly under developed and had just placed his Knight out of play.
10. ...Kf8 the best move. If Ke8 White plays Qh5+ with a great attack.
11. d5? with the idea of trying to trap the Knight on a5. f4 should have probably been played.
14. ...Nf6 Black finally developes the King Knight!
19. ...Ke8 Black voluntarily places his King in a pin.
20. Re6?? Intending to double the Rooks on the e file, completely over looking 20. ...Bxd5! and Black wins material and probably the game.
32. Nxf6?? Dave resigned here ?? because he thought the knight was poison. But if he had played 32. ...Re1+ the Knight could have been taken after 33. Kh2 and White would have had to demonstrate the win and in such short time control anything could have happened.

Both Dave and I should be ashamed to have played this game. I'm sure Dave was tied and I was sick; but this was indeed a "comedy of errors". Most game 30 or game 45 are. That's why I don't "Fritz" my games, I prefer to do my own analysis and learn from my mistakes. I already know that the computer plays better than me. If you read my comments you will find that I tried to be honest and not present a "glorified win" when I was just plain lucky to win this game. I'm not picking on Dave, my other games ended in me not keeping score after I was under 5 minutes on my clock. I would have liked to have shown my game against Joe Farrell, but all the "good" and "instructive" play occured long after I had stopped keeping score!
at 2:34 AM 5 comments 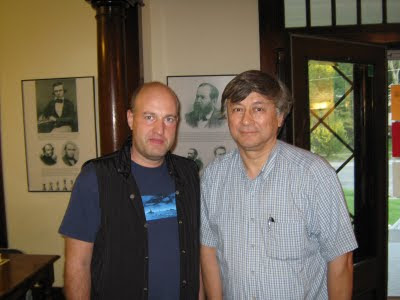 Johnny Owens is above with GM Alexander Shabalov at the Nashville Chess Center. He went undefeated tonight at the April Monthly Club Swiss! Jerry Weldin, Gelvic Cubar and James Whiddon tied for
2nd-4th place with a score of 2-1. The crosstable is here.

Amy Nunn became a club member and played in tonight's tourney! Welcome aboard Amy! We are excited to have you as a member.

Additionally, there are 11 ladder games rated with this MSA posting!
at 12:40 AM 3 comments 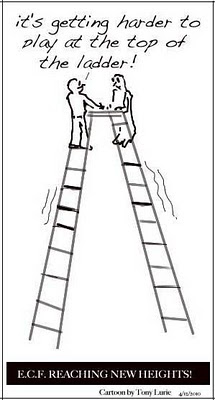 A copy of The Frankenstein-Dracula Variation in the Vienna Game by Eric Schiller was added to the Club Library thanks to Larry Davidson. The library saw action for the first time in a long time as members availed themselves to it during the meeting with one book being checked out to study at home.

Next meeting is our monthly rated tournament.
at 1:57 PM 4 comments

Joe Farrell and Ernie Weaver Tie For 1st In The April Fool's Open! 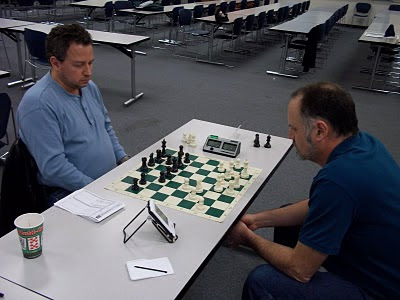 Joe Farrell and Ernie Weaver draw the final game of the tournament to decide the winners of this year's club April tourney! They both finished with a score of 3.5-0.5. James Whiddon came in a clear 3rd with a score of 3-1.

I asked all those that received a prize to submit a game or two to share with our readers. More details will appear soon!

The crosstable can be found here:
at 7:28 AM 2 comments