by John Coffey
I will be in Indiana September 4th through September 11nth to visit family and play a little chess. Now that my mother lives near North Vernon, Elizabethtown might be too far to drive, but I will try to make the two Louisville Meijer tournaments. Hope I see some of you there.
Best wishes,
John Coffey
at 11:19 PM 5 comments 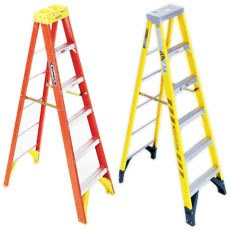 Last night we started the Club Ladder; active members names were placed in a box and drawn alternately by Sal and Andrew Lee. For the record; initial placement was as follows:

The current ladder is now: 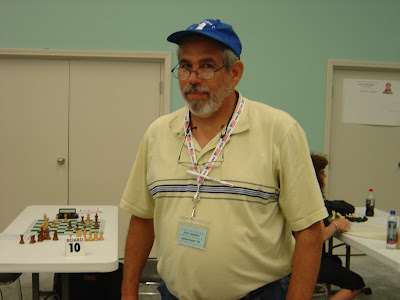 At our last meeting Sal asked what had happened to Bob Lenning. Hold the presses on the milk cartons; Bob is alive and doing well. For those who enjoyed Bob's posts you can check him out at his new blog "The Pied Chessman". To speak to Bob in person you can try Panera Bread on Saturday mornings around 10am.

Sal, I hope this answers your question.
at 1:05 AM 2 comments 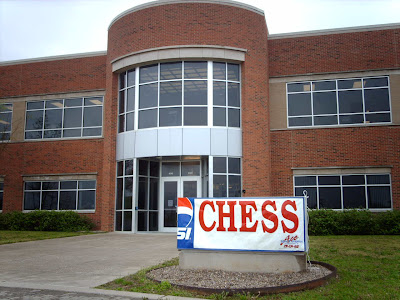 17 August the Club; with 11 Active Members present; voted in a "Club Ladder" after 45minutes of discussion.

Initial placement on the ladder will be by drawing Active Member names from a hat at the meeting of 24 August.

A copy of the approved "Ladder Rules" will be sent to all members via e-mail.

If you are not an member and would like to receive a copy of our "Ladder Rules" please leave your e-mail address in a comment and I will forward you a copy.

Ladder games may be rated if both players agree. The Club just keeps getting better; if you have been away for a while stop in and check us out!
at 11:22 PM 0 comments 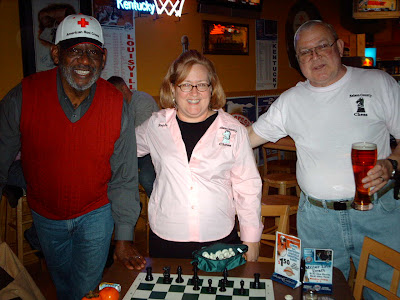 Stephanie Clayton became our second "Life Member" Saturday; Steff is the one in the middle of the photo on the left.

Being the only female in a Chess Club full of men is not as appealing as it might seem; it requires a good sense of humor, the ability to defend ones self, and apparently a pink chess board which Steff likes to play on occasionally.

Steff biggest chess accomplishment to date is winning $100 after finishing first in her class at this years Kentucky Open. Steff enjoys spending time with her grand kids, riding horses, and drinking bourbon; usually, but not always in that order. Steff also enjoys music and working with children.

Steff is currently spearheading an effort to establish a Scholastic Chess League in the Nelson County area; I'm sure it will be a huge success.

Steff, congratulations and thanks for the vote of confidence in the Club.
at 9:04 PM 0 comments

Clean The Chalk Board And Dust The Erasers 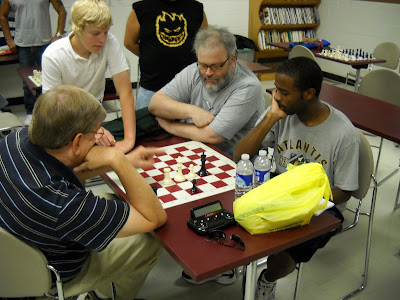 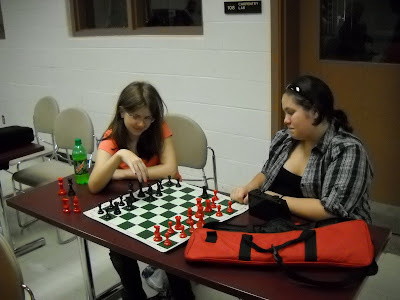 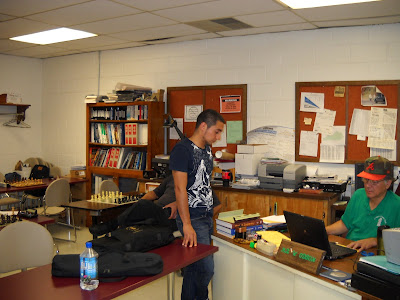 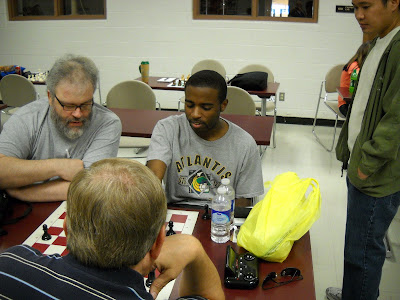 The "Back To School Tournament" was as cool as a varsity football jacket and as hard as an "open book" test. Seventeen players turned out to joust on the square field with Randas Burns going undefeated in the Open with 3.5 out of 4; while Juan Carlos Andino scored a perfect 4 points to take home the money in the "Under 1200" section.

Time is Running Out to Advance Register 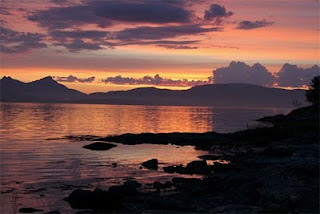 We now have 14 players that have advanced registered for "The Back To School Open."

Today is the last day to register in advance and save $5.00!

Those that I have registered are:

If your name is not listed and you thought you had registered, contact
me ASAP.
at 3:04 PM 2 comments 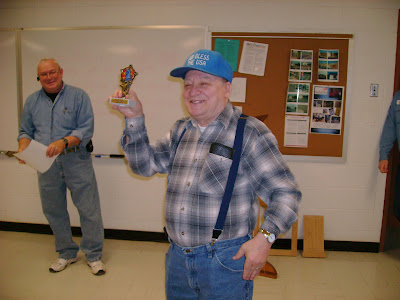 Dues were collected for the remainder of 2010 at the "pro-rated" sum of $5.00. Sal Mancuso, pictured on the left, became our first "Life Time Member"; presenting Steve with a check for $100.00. I am sincerely hopeful that Sal gets his moneys worth!

New member Brad Clark paid up for 2010 and generously told Johnny to donate his entry fee for the Back To School Tournament to a scholastic player in the event he can't get away Saturday.

Joe Farrell retook the lead in the 2010 Championship by half a point as he and Johnny Owens tied for first with 2.5 points while Ernie suffered one of those bad outings we all have on occasion.

All in all a good turn out with 10 players. The Championship should be updated by tomorrow.

Reminder; we will vote on the Ladder next week, if you have any ideas be ready put them up for consideration.
at 12:41 AM 0 comments 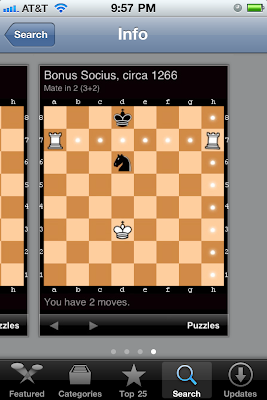 John Coffey our member in Utah is in frequent contact and recently sent me the above mate in two problem. The first to comment with a correct solution will win a chess score book; NO COMPUTERS!

John's web site, Entertainment Journey has a lot to offer in the way of chess instructions. One of it's features is problem solving featuring 1, 2, and 3 move problems; both with white to move and black to move.

John recommends solving the problems on a regular basis with the goal of beating your previous time by 1 minute. This will help improve your tactics and build up your pattern recognition. You may want to stick to the 1 and 2 movers for a start as John has found a few notation errors and other problems with the 3 movers that he is fixing as time permits.
at 8:49 PM 8 comments

Dues Voted In And Other News 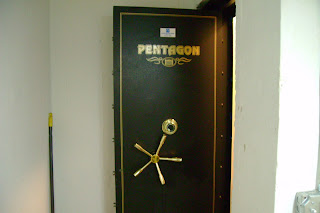 Club dues were voted in at last nights meeting. Dues were established at a rate of $12 per year with Life Memberships available for $100. Sal lobbied for a reduced Life Membership rate; but his pleas fell on deaf ears.

A paid up membership entitles the "Active Member" free entry to the "Second Tuesday" tournaments and a $5 discount off the entry fee for our annual "Spring Tornado".

Dues will be used primarily to pay rating fees, USCF Affiliation fees, and tournament announcements in Chess Life. All other expenditures must be approved by a majority vote of the "Active Members".

In other news; Andrew Lee has returned from his visit to North Carolina and has pictures of the enormous fish he caught while fishing off the coast. Andrew must have grown 6-8 inches over the summer and is sporting a new hairdo.

Johnny Owens volunteered to fill in as Club Vice President until the elections in November. I have accepted his offer and in the absence of a volunteer I will take on the secretarial duties myself; until then. Welcome aboard Johnny!

Next up - A Club Ladder!! We'll take a vote next week between rounds.

Last but not least; we have 6 players registered so far for the "Back to School" Tournament on the 14th; entry is only $10, see Johnny or check out a previous post for the details.
at 11:40 AM 0 comments

Back to School Open - August 14

Prizes: CASH, based on entries!

Round Times: First round at 10:00am, future rounds ASAP