by Gelvic
It's time to give those who endured the whole year of tough "battles" and emerged victorious their awards and recognition. The trophies will be awarded Tuesday, January 3, 2012. Congratulations to the winners!!
at 5:51 PM 0 comments 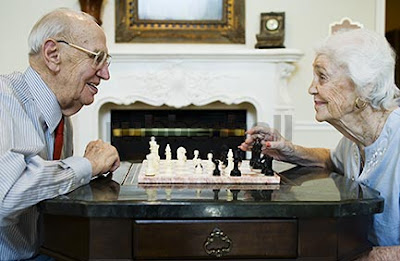 With the year drawing to a close I'd like to thank everyone who helped the Club stay viable as we prepare for 2012. A special thanks to Johnny Owens who met and exceeded all Tournament Director expectations; I'm sure that no other club in the USA had tournament results posted faster and more accurately than ours. Johnny also served as Vice President, thanks Johnny!

Kerry Fatula deserves recognition for always being at Club meetings, rain or shine, Kerry doesn't care about rating points he truly loves the game and plays win, lose, or draw. It should be noted that Kerry gained over 100 rating points this year!! Kerry has also accepted the position of Club Tournament Director for 2012.

Stephanie Clayton: with plate already filled with work, her kids chess club, and teaching at night; took on the responsibility of Treasurer when Steve Parsons had to relinquish the position due to extreme family circumstances. Stephanie took home prize money at the Kentucky Open again this year, organised and financed the Veteran's Appreciation Tournament, and gained 62 rating points this year.

Joe Farrell served as Club Secretary and has made a great personal effort to attend all business meetings and tournaments. Joe gets the "Hero Award" for fending off the "bee swarm" to get to the "honey" and become the Club's first "home grown" Expert!! Joe is the Club's new Vice President.

Amy Nunn has distinguished herself and brought glory to the Club by becoming the 2011 Kentucky Woman's Champion!! Amy not only raised her rating 44 points over the year, but has also "volunteered" to serve as Club Secretary.

Ernie Weaver serves as our "Liaison" to the College and schedules classrooms for our "Spring Tournament". Ernie also proof reads books for Dan Heisman and is the point of contact for the Club on the ECTC Web Site.

Rudy McKinney, Bob Kilmer, Nick Folino, Dave Brock, and Sal Mancuso always attend when they are able, in town and work permitting. This group along with Peston Andrew, provide the foundation on which the Club is built on.

Gelvic Cubar our new Club President is currently experiencing a time of personal turmoil from which I am sure he will emerge stronger than ever. The Bluegrass State Champion for 2011, Gelvic is a tough opponent across the board and a refreshingly genuine "good guy".

This year our Club gained 431 rating points; 1744 if you count Josh Jordan's initial rating of 1313. Josh e-mailed me that he will come by in January and pay his 2012 dues. We need to put a GPS tracking device on him so we can get him to show up more often!

Larry Davidson (Glasgow) deserves a special mention for supporting our Egg Salad Tournament by participation and donating enough books for each participant to receive one FREE! Larry also provided a book concession with very reasonable prices which I think "sold out" (James Whiddon was top purchaser). Thanks Larry for all your support and kind e-mails.

Nathanial Emdee, where are you? Your e-mail address is no longer valid.

Thanks to everyone who reads this far. Thanks to all for your support during my tenure as Club President. I eagerly await our next meeting over the board! Wishing everyone health, joy, and prosperity in 2012!

PS - Benny Wilson is back. Andrew Preston is recovering from his knee replacement surgery after a rough fight with infection. Joe thinks he has two new members lined up for 2012. The Club will host the inaugural "Kings Tournament". Life is good and Chess will be even better in 2012!!
at 3:46 PM 2 comments

Joe Farrell and Jerry Weldin tied for first in this years Club Championship!!
Both finished with 4 points out of 5 with Joe scoring 3 wins and 2 draws (the only player not to lose a game.) to Jerry's 4 wins with 1 lose (to Joe). Jerry was declared winner on tie breaks. (The first tie break was number of blacks. Jerry had 3 to Joe's 2.) Gelvic Cubar placed 3rd with 2.5 points, Kerry Fatula ("The Spoiler") took 4th with 2 points, Johnny Owens and Ernie Weaver placed 5th and 6th respectively.
The official X-table will be added when available. Just in click here for X-table.
at 11:41 PM 3 comments 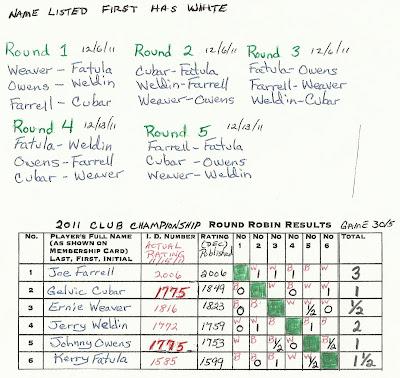 X-table showing last nights results in the Championship. Also present were Amy, Bob, and Nick who played in the Welding Room.
at 8:01 PM 0 comments