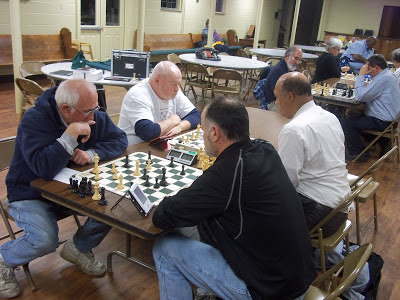 Seven players from our club traveled up to New Albany, IN for our return match with "The Chess Club of Southern Indiana." We won the first match 4-1 on October 30th and this time we won 5.5 to 1.5. We won four games and drew three! A good time was had by all and we hope to do this again soon. Perhaps some of us will share our game scores with the club!
at 12:23 AM 3 comments

A Truly Fun Game from The Tired of Turkey Open

by Joe F
Below is my game against Larry Bell. A really fun game that just played itself. Can you find the resource for Black on Move 12?
Play online chess
at 4:28 PM 8 comments 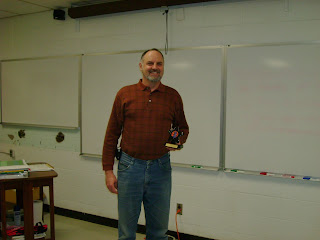 Joe Farrell, shown above, posted a perfect 3 points out of 3 to win the "Dead Turkey Open". The Under 1200 Section was won by Robert M Woodruff, from Owensboro with 2.5 out of 3. Due to an error on the part of the TD (me),  I was forced to rename the tournament in order to get it submitted for rating. Thanks to all who attended; especially those who traveled  long distances to attend - Davy Williams from Adair County, Larry Bell from Lexington, and Robert Woodruff from Owensboro. Click on this link to see the X- Table.
at 10:14 PM 0 comments 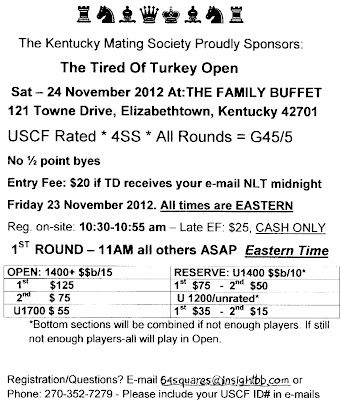 Farrell And Weldin Tie For First! 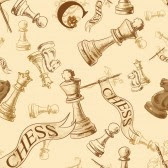 Six showed, four played, and two tied. Kerry and Sal both elected not to play; Kerry was inroute to work and Sal didn't want to force a "bye situation".*********** Amy, Joe, Johnny and Jerry played a "Quad" with Jerry and Joe tieing for first. Click here for the X-table. ********* First through third place appear to be sewn up with only one point separating Amy, Ernie, and Steve for the #4 spot.
at 1:13 AM 0 comments

Election Results Are In 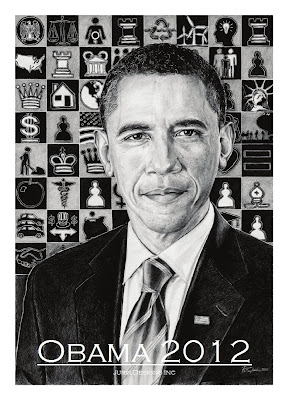 Joe was unable to attend the special business/election meeting due to family health problems. Joe, you and your family are in the Club's thoughts and prayers.******** Amy Nunn chaired the meeting with Kerry Fatula, Rudy McKinney, Johnny Owens, and Jerry Weldin attending as well as new member Larry Bell.********* The new officers, elected unanamously are: President................Johnny Owens ****** Vice President...........Kerry Fatula ****** Secretary................Jerry Weldin ****** Treasurer................Steve Parsons ****** Additionally the attending members voted to amend the Club Constitution striking the requirement to be a member of USCF from the Club membership requirements.***** Many present reported problems with the web site; not being able to get on to post articles, comments, etc. It was resolved that Ernie Weaver be asked to investigate and Jerry Weldin did so 7 November. Ernie will check into the problem and suggested that we devote a portion of a meeting to a class on how to access the web site.***** Skittles and speed chess followed the official part of the meeting.***** The site still won't allow me to create paragraphs, please bear with us. I have went back in and tried to make the post easier to read.
at 10:10 AM 0 comments

by Joe F
After my singularly poor performance as president, I'm amazed I haven't been impeached! On the positive side, thanks to Johnny Owens and Jerry Weldin, Chess in Etown has flourished this year with many opportunities to play in well run tournaments. Nonetheless it's time for a general election of the Etown Chess Club. Our next regular business meeting is November 6th. This would be an ideal time to elect our 4 officers (President, VP, Secretary and Treasurer). Please forward nominations to either myself or Amy Nunn. If you cannot attend the meeting and still want to be heard, send in an absentee ballot.
at 2:30 PM 0 comments

My Game From Our Match With The Southern Indiana Chess Club

by Jerry
This is my game against John Warth. John is the "Sponsor" of the Southern Indiana Chess Club. John told me after the game that his rating was 1254. A quick check with USCF revealed that John had let his USCF membership expire in 2006 after playing in a three round tournament;USCF considers him as unrated. It was interesting to see that all of the other players in the section John played in, with the exception of John and one other, are still playing in USCF events. Check out their "then and now" ratings. The site will not let me list the information in a column (nor let you have separate paragraphs) so the name will appear first followed by the "Then" rating and then the "Now" rating. James Ballard : 1473 -- 1606 , Ron Lipman : 1396 -- 1654 , Andrew Lipman : 1319 -- 1748 , John M Marcsik ; 1395 -- 2024 , Greg Miller : 1457 -- 1665 , John beat Greg Miller in the tournament while losing to both Lipmans. One can only guess what John's rating would be today if he had remained active in USCF events! As usual I forgot to reset the board. Please click on the extreme left arrow before you start. I have not ran this through any "engines" so the flaws are all there to be found for both sides.

Play chess online
Editor's note: Both Johnny and myself have been unable to get the site to allow paragraphs, etc. I'm sure things will get sorted out eventually.
at 11:13 AM 2 comments