by Jerry
Gelvic e-mailed me from Denver in route to San Francisco and gave me permission to share the movie he sent me earlier in the day. Click here to watch the movie which includes footage from the Winter Blues Tournament.
Produced by Gelvic Cubar, Camera man Johnny Owens. Enjoy!!
at 8:32 PM 2 comments 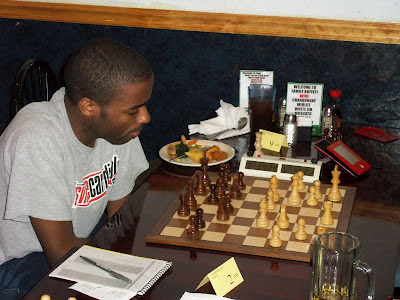 Randas scored 4-0 winning 1st place in "The Winter Blues Open" and took home $100. There was $460 given out in prizes at this first event held at "The Family Buffet" in Elizabethtown! More details and photos will be posted at the KCA website, as well as the Hub City blog site. In the meantime here is the USCF crosstable of the event!

I want to thank all those that attended and maybe I can play next time!
at 9:38 AM 2 comments

by Amy
The following members showed up tonight to play skittles:  Amy, Ernie, Sal, Rudy, Kerry and Rayane.  Don't forget the tournament this coming Saturday at Family Buffet.  First round starts at 11:30.
at 11:53 PM 1 comments 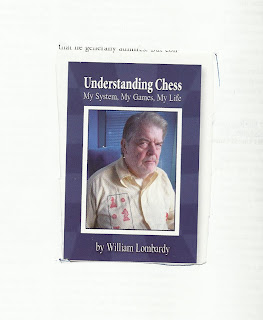 For the younger players; GM William "Bill" Lombardy was a world class player during the "Fischer Era". His phenomenal score of 11 out of 11 while winning the World Junior Championship in 1957 has never been equalled before or since. GM Lombardy was Fischer's second during his successful match against Spassky for the World Championship; although by all accounts Fischer refused to use his services.

Lombardy was an ordained Catholic Priest in his younger years, later giving up the priesthood to marry and start a family.

Hans Ree reviewed the book in the latest volume of New In Chess, 2012 #1, and mentioned that the sole distributor was the author. This set me on a google search to find how to order a copy. The only place I could find ordering information was at this link.Order book here. 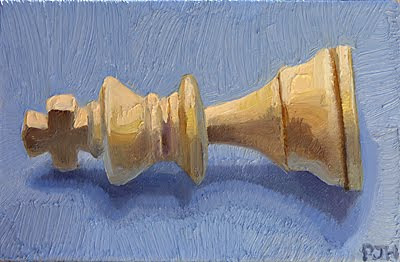 Due to circumstances beyond my control, I tender my resignation effective today February 9, 2012. I assure you my fellow club members that I will come back stronger than today. Thank you for helping me improve my skills by giving me tough games.

by Stephanie
I guess we will be having elections next month to juggle officers. Since there is not a provision in the constitution for appointments, article II section 1 seems to indicate that we have to notify members by email one month before the elections.
The nominations made tonight were as follows....I think:
Joe Farrell moves up to President Amy Nunn to VP Jerry Weldin-- Secretary Treasurer stays the same (Clayton). Since Joe and Amy are already officers, does that mean that only Sec. position is voted on? I"m not sure...Sal was asking what the constitution said and so I'm adding this copy below. Sal was asking what the Vice President's job was. Attached is the
Constitution of the Elizabethtown Chess Club.

We, the chess players of Central Kentucky, in order to establish conditions under which chess can flourish in our area have resolved to combine our efforts to accomplish this common goal and do hereby ordain this constitution to establish rules and order in the pursuit of this goal collectively as the Elizabethtown Chess Club.

SECTION 1 – PRESIDENT. The President shall chair all Club meetings; guide the club in the pursuit of nurturing chess in the area; appoint committees as needed; and appoint individuals to necessary posts within the Club, subject to ratification by a majority vote of the membership.

SECTION 2 – VICE-PRESIDENT. The Vice-President shall perform the duties of President in his absence and Chair Committees as directed by the President.

SECTION 3 – SECRETARY. The Secretary shall keep an accurate record of all Club business meetings and read the minutes of the previous meeting if called to do so. The Secretary may also act as Treasurer.

SECTION 4 - TREASURER. The Treasurer shall be responsible for the collection of dues and monies owed to the Club, securing said monies, and disperse monies as directed by the President. Shall maintain accurate fiscal records and render a report to the general membership annually and as directed by the President. Tournament Directors may collect monies as necessary in the conducting of a tournament; but must turn over any excess monies after expenses; with a complete accounting of all monies taken in as fees and dispersed as prizes/necessary expenses; to include a list of prize winners; to the Treasurer no later than the next scheduled meeting.

SECTION 3 – RULES OF CONDUCT. Roberts Rule of Order shall be used at all meetings.

SECTION 4 – CONSTITUTIONAL AMMENDMENTS. This constitution may be amended by a majority vote of the Current Active Members at any annual meeting; or after a vote brought about by a properly submitted and seconded motion to do so.
at 9:17 PM 2 comments