by Jerry
Just a reminder that Johnny's Hub City Chess Club is hosting a tournament this Saturday to close out June with a bang. Particulars are contained in the flier below. 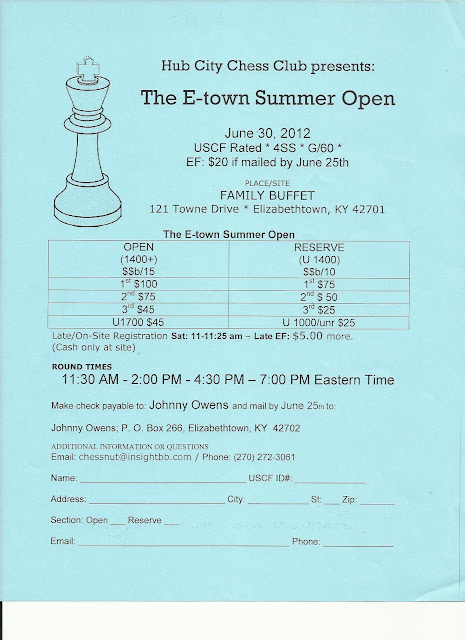 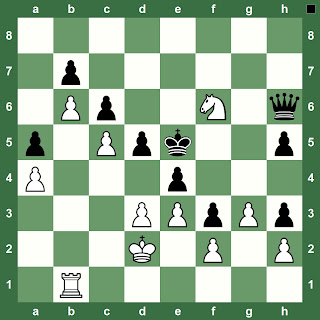 When I saw this problem it immediately reminded me of Kerry. I am putting the solution at comment number 1 below.
at 5:16 PM 8 comments

by Jerry
In the old days of mechanical chess clocks there were "buttons" with stems which were pushed to start your opponents clock. These buttons could be seen for some distance allowing one to walk about while keeping watch on their clock out of the corner of their eye.The Excaliber clock is an example of that feature being carried over to the new digital timers.Recently I have noticed several players at tournaments who turn off the move indicator lights on their chess clocks. Indeed I was even thanked by an elderly opponent in last years Louisville Open for having them turned on on my Chronos. I personally consider turning the lights off unsporting; therefore I decided to see if there were any rules regarding this. While USCF does not cover this in their rules, FIDE does. Reference FIDE Handbook 5.1.(d) covers clocks. Which states that you should be able to see who is on the move from a distance of 10 meters.But more specific is the testing requirements to get FIDE approval of a new clock:"Clocks must provide a clear visibility of which player is to move, from  all sides at a distance of 10 meters".

As USCF gradually gets more instep with FIDE, I predict that  "clock rules" will be upgraded to conform with FIDE standards. Something you should consider if in the market for a clock. Currently the DGT XL Digital Chess Clock is the only FIDE approved clock sold by USCF.

There is no need to panic and trash your old clock; any clock can be used in a non-FIDE sanctioned event. But if you use a Chronos, be a good sport and turn on the LED move indicators!
at 11:52 AM 1 comments 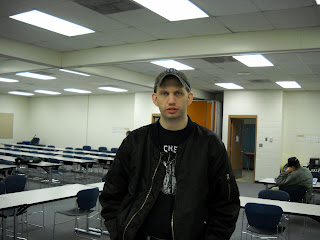 Above is a file photo of Nathaniel Emdee, Life Member of the E-town Chess Club who surfaced at the Kentucky Open last weekend. Click here to view the X-table and see how he did.
at 11:09 PM 1 comments 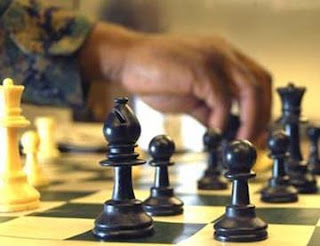 The June Rating Tournament was one of our strongest ever thanks to guests Andy Porter and James Ballard who drove down from Louisville to join the fray. Congratulations to Andy who won with a perfect score.

Additionally Louis De Fiore returned to compete and Rayane Chatrieux  achieved his 25 game mark to escape his "provisional" status.Click here to review the X-table.
at 6:51 AM 0 comments

by Jerry
Just a quick reminder that the KY Open is this week end. For details click on the KCA link (on the right hand side of your screen) then click on "Tournaments".
at 12:49 AM 0 comments