Thomas Is Perfect At The 2nd School's Out Classic! 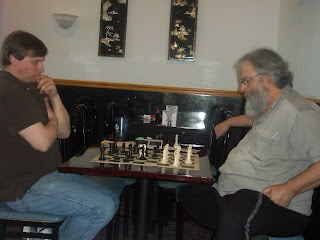 Rodney Woolson (left) playing Michael Thomas in the 1st Round of the tournament!

USCF Expert Michael Thomas went 4-0 in this year's "School's Out Classic" to win 1st Prize! Sai Ravi Munagala and Michael Williams both scored 3-1 to tie for 2nd place and the Under 1800 prize. Philip Laws took home the Under 1400 prize and Jacob Williams went home with the Under 1000 prize!

It was a good showing considering it was a holiday weekend and several big tournaments within easy driving distance! The complete crosstable chart can be viewed here:

Thanks to all those that played and I hope to see you at the Kentucky Open!
at 5:17 PM 1 comments

One Of My Games From Saturday


Click on the double arrows at the extreme left to reset to the starting position then click on the single arrow pointing to the right to replay the game move by move.
at 4:12 PM 0 comments 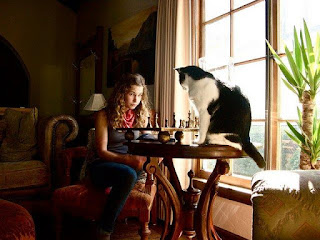 This Saturday, May 25th, I will hosting the 2nd Annual School's Out Classic at the Family Buffet!

To look at the tournament flyer, click here:
at 10:22 PM 3 comments

Owens Is Perfect In May Monthly Swiss! 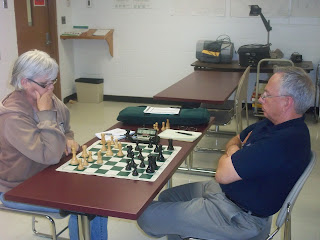 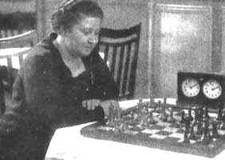 The photo above shows Vera Menchik the first Woman World Chess Champion at the board. Menchik won the World Championship 8 times! With a phenomenal score of 78 wins, 4 draws, and only 1 loss! Not only did Vera play in women's events she also participated in men's events and played matches against men. Before the 1929 Carlsbad Tournament Viennese master Albert Becker remarked sarcastically that anyone losing to her should be put in the Vera Menchik Club . You guessed it, he became the first member!

In the Elizabethtown Chess Club there is a similar club: the Amy Nunn Club! Amy has taken more than a few scalps in tournament play, click here to view her record and once you get the link opened click on "Top 30 opponents" then click search for a by name list of her victims. Unbeknown to me Amy even keeps track of skittles games and informed me that I had just lost my first game (G/10;d5) against her at a recent Club meeting. Once Amy improves her end game play (we all need to do that!) she will become a force to be reckoned with as she has already almost eliminated her old time control problems.
at 1:27 PM 1 comments