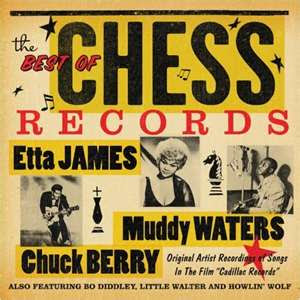 While setting here wondering what happened to James Whiddon and Mike Leito I thought I'd bring you "the rest of the story".

Prior to the last round of the Game 75 Tournament a short meeting was held to vote on Stephanie's request for the Club to fund any shortfall in money for the guaranteed prize fund for the upcoming Veteran's Tournament. After a brief discussion a vote was taken and the request was denied. Immediately several Club members volunteered to pitch in out of pocket to cover any short fall. Stephanie, we support you and have your back, erase that worry from your mind!!

Joe suggested that we allow the first 30 minutes of one meeting a month to conduct Club business and provide a forum for any Club member to bring up issues or ideas. A vote was taken and it was decided that our business meeting would take place on the first Tuesday of each month.

Kerry Fatula missed the meeting due to the hospitalization of his wife, I don't have any details. Kerry your wife and family will be in the thoughts and prayers of all of us; don't hesitate to call if you need anything.

Andrew Preston "wore out" his artificial knee and will have it replaced 1 November;
Andrew may still be able to make the Veteran's Tournament to defend his title from last year. If not.. he may play by phone!! You can't keep a Cav Man down for long!
"High diddle diddle file from the middle, column left with a half step damned near a whole step .. march!"

Kenneth Taylor; not a USCF member yet but a strong player who is destined to win the unrated prize in his first tournament.

Louis De Fiore; a USCF Life Member with a floor of 1700! Louis had a won game against Joe when his time ran out last night. (They were playing 5 minute games with no time delay!) Danger Will Robinson!

I guess that about wraps it up, don't miss the Veteran's Tournament; the raffle alone will be more than worth the trip.
at 11:00 PM 2 comments 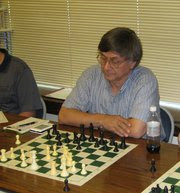 Round 5 of our Game/75 tournament was completed last evening and Johnny won against Amy to finish with 3.5 out of 5.

In the other games Gelvic won vs. Rudy and Ernie won vs. Sal.

The crosstable is located here:

Everyone that played, enjoyed the longer time control and I hope we can try
this again soon.
at 9:18 PM 2 comments 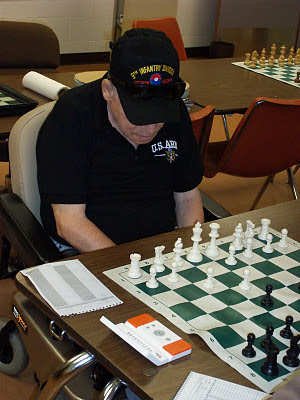 Tonight Gelvic was a no-show, so Rudy stepped-in to ensure we didn't have someone with a bye. Sal went on to upset him and win his first game in the tourney.

In the other games, Kerry beat Amy and Johnny and Ernie's game ended in a draw.

The last round will be held next Tuesday!
at 11:16 PM 2 comments 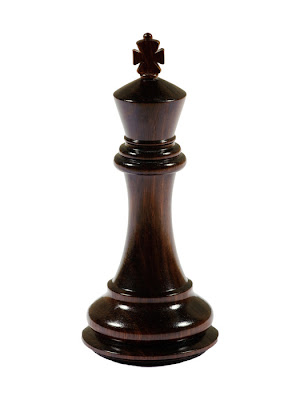 While the chess board is a monarchy, the Club is not. November is nearly here and it is time to elect new Club Officers. Offices up for election are: president, vice-president, secretary, and treasurer. We also need librarians. If no one will volunteer for these positions we will have to draft/nominate folks to fill these positions. The college may take away our privileges if they find out we have a sexagenarian as president!


I haven't fed this game to Fritz yet, but we need some comments.
Johnny, you certainly know the opening better than we played it.
Jerry, you're just the man to review the tactics.
my quick comments. I think that Ernie should have played c5 earlier and also needed to take the Knight as soon as it got to e5.
I looked at other moves besides 11Nxf7 but I thought the sac wouldn't be there again.
I calculated as far as my playing 14 Re1 and then looked at Ernie playing Bd8 and Bd5. I was confident that white wins against both, but I did not consider 14 Be4 until he played it.
at 12:32 PM 5 comments 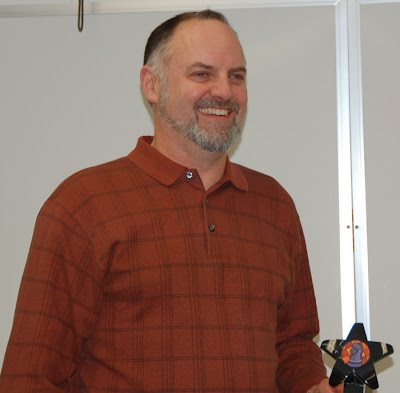 Joe Farrell went 3 for 3 and won the October Rating Tournament breaking the 2000 barrier and becoming the first Club Expert!! Click here to see the X-table.

Joe joined the Club in 2008 and played in his first event in March of that year. While rusty from a long lay off, Joe found that his rating of 1970 didn't intimidate the patzers he would have to face at this new time control of game 30. It took Joe 42 events to gain 36 points! Along the way Joe suffered 15 loses and 25 draws (10 draws against Johnny Owens alone). A win against Joe was hard to come by; those who did win did not do so on a regular basis. Earnie Weaver tops the list with 6 wins out of 19 games followed by: Jerry Weldin with 4 wins out of 24 games, Steve Parsons with 2 wins out of 11 games (but with 7 draws Steve had the best percentage against Joe - 50%!!), Kerry Fatulla (always dangerous!!) 1 win out of 12 games, Nick Folino 1 win out of 5 games, and lastly my chess buddy Bob Kilmer ( who I have fought with over the board since the 1980's) - 1 win out of 4 games.

Joe, it was a long time coming , but richly deserved. We were all pulling for you while at the same time not wanting to be added to your "list of victums". Thanks for bringing your talent to our club.
at 1:43 AM 2 comments 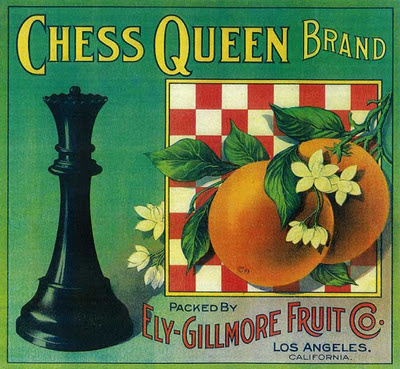 Amy and Sal joined in tonight and played in round 3 of our Game/75 tournament! Johnny beat Gelvic and Amy beat Sal. Ernie and Kerry's game ended in a draw. The tournament will resume in 2 weeks as next week we will have our regular monthly tournament.