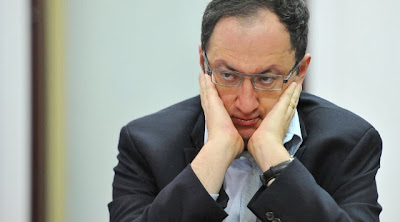 Boris Gelfand surprises Grischuk with novelty leading to a just in time win to avoid play-off. Browse the right hand side of this site for links to various reports. Click here for the "official report".
at 5:04 PM 0 comments 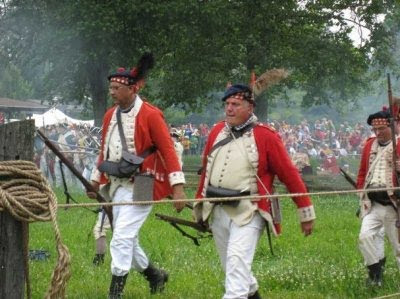 That's Rudy on the left leading the charge!
The "Ladder" saw a lot of action tonight along with regular skittles and 10 minute games. Dave and Kerry were already playing when I arrived but I don't know the outcome of their game(s?). Here are the games that were posted on the chalk board as "Ladder games and or rated games:
McKinney mugged Owens - "ladder game" putting Rudy on the top rung -- rated
Owens gets revenge against McKinney -- rated (not a ladder game due to ladder rules)
Nunn schooled Clayton - unrated ladder game (no changes to ladder)
Weldin shut down Cubar - rated (no ladder changes)
Mancuso embarrassed Clayton - rated (no ladder changes)

Other news:
1. Benny Wilson has returned from Florida and assures me that he will be back to the Club soon.
2. Johnny played in Louisville last week and defeated our good friend Bobby Amback. Those of you who have played Bobby know that this is not an easy task!
3. James Whiddon has a booth at the E-town Flea Market selling Chess Paraphernalia, "hot wheels", and assorted games. If you have chess sets, boards, or clocks you'd like to get rid of see James and work out a deal!
4. Yes, Dave Brock did show up tonight.
5. Sal is back in all his glory. New van, same chauffeur!
at 11:00 PM 3 comments 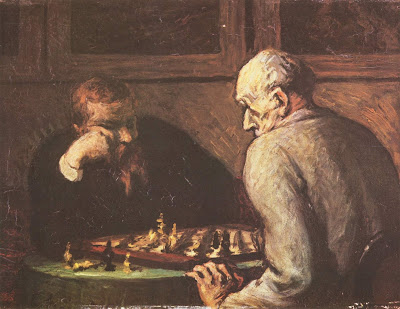 There were 2 ladder games tonight. Amy drew Kerry and jumped to the #7 position on the ladder. The game was unrated.
Rudy dropped a Knight against Jerry in their rated game, giving Jerry the full point.
at 9:49 PM 0 comments 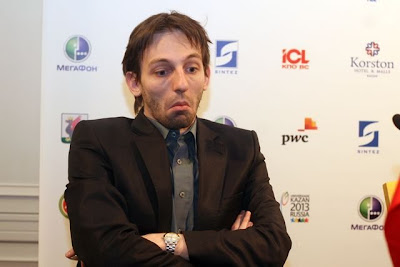 FIDE may need to rethink the candidate selection criteria. Grischuk was not in the original 8 candidates and only got to play because Carlson turned down the opportunity. Now after dispatching the world's #3 ranked Aronian and beating former World Champion Kramnik; Grischuk has the opportunity to grab the golden ring. Gelfand has the edge in experience but that is probably not as important in our new "chess computer" age as it was in the old days. Grischuk has youth, physical conditioning, and expertise in speed chess on his side. While I have nothing against Gelfand, I can't help but root for Grischuk when the games resume on the 19th.
at 11:13 AM 0 comments

It's Gelfand and Grischuk! 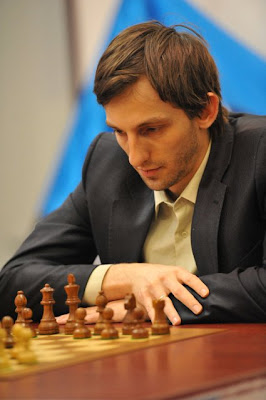 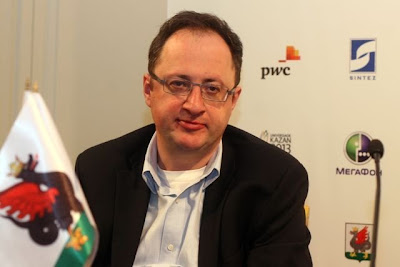 Gelfand and Grischuk advance to the finals and will play a 6 game match for the right to play Anand for the World Chess Championship. The games begin 19 May at 0700 Eastern Time, click here for the full schedule.Kamsky represented the U.S. well, and held his own until the "rapid" play began.
Chess.com has already posted an excellent report of the semi-finals; to include all the games! Click here to go to Chess.com's report.
at 2:15 PM 0 comments 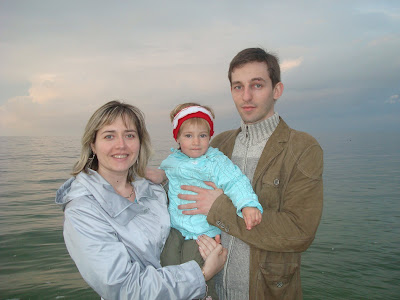 With all the games being drawn during the "regular" time limit the players will move onto the "rapid" time limit of game 25 in hopes of producing winners. Should there still be a necessity to break ties, up to 5 two game blitz matches will be played at 5mins + 3secs.

The picture above is of GM's Grischuk and their daughter. I thought the readers would enjoy learning that GM Grischuk is married to GM Natalia Zhukova a champion in her own right who was a child prodigy achieving the WGM title in 1996 and the full Grandmaster title in 2010.Click here to view her FIDE rating card. For an interview with Alexandra Kostinuik from 2009 with more photo's click here.
at 5:12 PM 1 comments 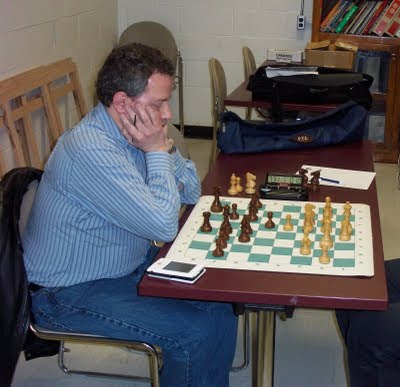 We had nine players that participated in this month's club tourney!

Ernie Weaver won all three of his games to take 1st place and is back to Class A. 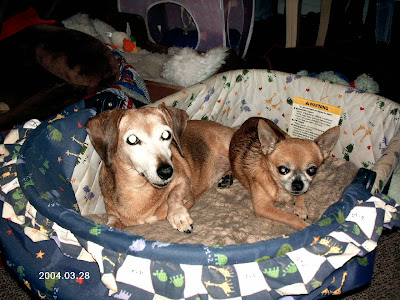 Two more dogs are eliminated from the fight as Kramnik and Grischuk win their playoffs to advance to the next round against each other.

Grischuk knocked off Aronian who was rated #3 in the world at the start of the match. Due to his aggressive play I'm going to stick my neck out and predict that Grischuck will also defeat Kramnik when play resumes on the 12th.
at 1:28 PM 0 comments 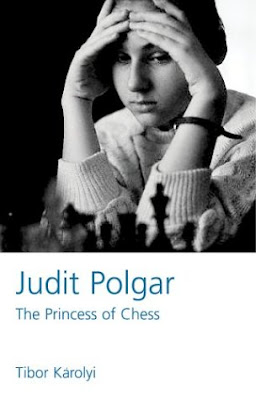 Here is a photo of Judith Polgar in her younger days, currently the highest rated mother in chess. Everyone was probably getting tired of Kamsky and Topalov's pictures.

All the games in the Candidates Match were drawn today. Therefore Kamsky advances to the next round by avenging his 2009 lost to Topalov with a score of 2.5 - 1.5. The only other player to score a win in the "regulation 4 game matches" was Gelfand who becomes Gata's opponent for Round #2. A good match up if you consider they are only separated by one rating point on FIDE's latest rating list. Gelfand - 2733, Kamsky - 2732. Additionally both defeated opponents rated approximately 40 points higher than themselves in Round #1.

The rest of the field will lose a day of rest/preparation as they will be playing "tie break" games tomorrow. I'm sure their "seconds" are cursing as we speak.

Here is a review of the schedule for the next few days:
09 May - Tie breaks Kramnik vs Radjabov and Aronian vs Grischuk
10 May - Rest
11 May - Rest
12 May - Round #2 begins:
Kamsky vs Gelfand and the winners of the tie breaks will play each other.
at 2:21 PM 0 comments

US Chess Champion Gata Kamsky scores the first win in the Candidate Matches! As of this posting 7 complete games have been played between the 8 "candidates"; Kamsky is the first to score a win after Topalov allowed his Queen to be hemmed in out of play at a3. You can play over the games at the official site by clicking here.

Right after posting I checked and found that the 8th game had also drawn. -Ed
at 11:42 AM 0 comments 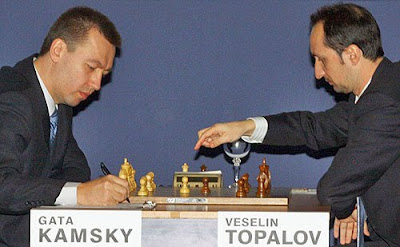 The 2011 Candidates Matches began today. America is represented by Gata Kamsky our newly crowned US Champion. Kamsky is playing Topalov just as he did in 2009 when he lost 4.5 - 2.5; I believe it will be a better fight this time.
To follow all the games as they are played click on this link to the official site. To review the games from 2009 click here.
at 10:46 AM 0 comments 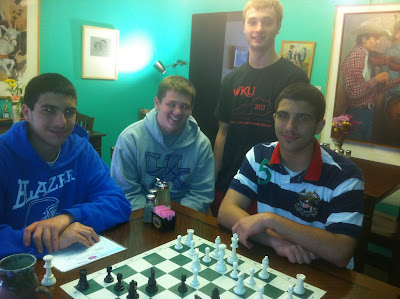 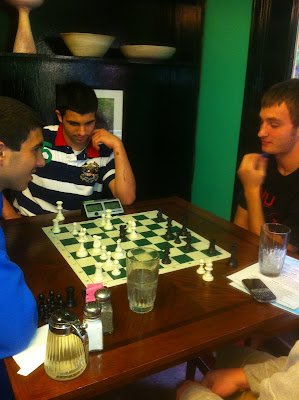 Stephanie Clayton sent me the above photo's and has once again "Tom Sawyered" me into doing her work for her.
What do Nelson Co football players do when school is flooded out? Play chess of course! The players are Jake Lemieux (Steff's nephew) and Nelson Co Football Team Captain, Chris Losch, Nathan Kassiah, and Tim Kassiah.
Steff reports that the Kassiah brothers were victorious after being cheered on by Raina (mother) and Nada (sister). Reportedly the ladies present munched on cookies and enjoyed the "eye candy".
A return match has already been scheduled for the next "flood day".

I have played Raina, Nathan, and Tim in my trips to Bardstown and Nada kibitzed the game I played her mother. A chess playing family for sure! Hopefully we can lure them to E-town for some games.

Thanks for the photo's Steff! If I got anything wrong please make a comment for the record.
at 1:30 AM 2 comments

Owens Stays At the Top! 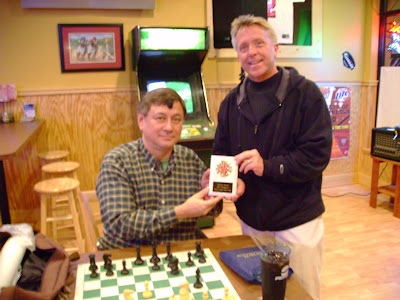 Johnny Owens (seated) retained his #1 spot on the ladder last night by holding off the challenge of Ernie Weaver in the only Ladder Game of the night. The game was rated.
Johnny announced that he is planning a "Senior Tournament" for those over 50; details will be forth coming. It will be interesting to see if any of our " 39 year old" ladies turn out (<:
Besides Johnny and Ernie; Steff, Nick, and Kerry showed up - the latter two took turns at my chess butt and wore it out. I can take some consolation in knowing that Nick will suffer greatly the next time Deb and Steff share intelligence reports.
at 12:40 AM 0 comments

It's Kamsky and Zatonskih !! 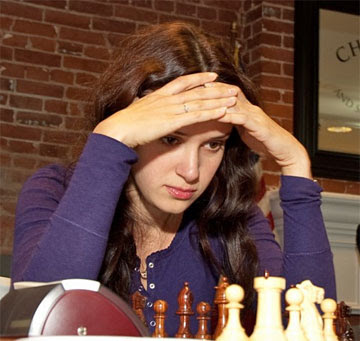 Given a choice I naturally chose Anna's picture!

Unless you are still in your "storm shelter" you know that Gata Kamsky and Anna Zatonskih won the US Championship in their respective gender division.

I have noticed that most web sites/blogs just plagerize what has already been posted else where; so in an attempt to be original I'd like to give you a "patzers view" of my observations gleaned from watching the action (as much as I could) on the Saint Lewis Chess Club Web Site.

When we get as much rainfall as we did last week my back yard turns into a swamp and eventually water tries to claim my garage as the eight ocean. So.. around Good Friday I found myself battling the flood waters with a 12 gallon shop vac given to me by my son's family a couple of Christmas's ago. (Young folks love Black Friday!)
On Monday the day after Easter I sent my wife to Home Depot to get another shop vac with a drain plug as I was having trouble controling the water with only one! Last Tuesday while the the Club was forced into the hall due to a tornado warning I was battling the water. As things didn't get rough untill about 2:00 AM I used the box the new shop vac came in as a table and set up my lap top on it to watch the US Chess Championships. While I missed a good deal of the commentary, I actually got to view most of the play off games.

What I learned listening to Maurice Ashley and Jennifer Shahade commemtary was very insightful for me and the games were excellent. The following "lessons" that I gleaned from these sessions were:

Gata Kamsky, currently 18th in the world ratings @ 2732 deserves any accolades given. His first game against Shulman in the men's finals was nothing short of soccery! Check it out on the USCF web site. I will diffinately watch his match with Topalov next week!

Anna Zatonskih, currently the 7th highest female chess player in the world @ 2537 turned in a spendid performance in spite of the roughest opposition! In her interview after winning the Championship she bemoned the fact that she had not "played up to her performance level" but ensured her fans that she will have more time to devote to chess when her 4 year old daughter, Sofia, starts Kindergarten next year. Single and childless couples be assured that her performance was extradordinary under the circumstances!!

My impressions of the Championship are as follows:
1. The women fight without mercy and give no quarter! By far the most intertaining/instructive games were produced by the ladies.
2. The young /up and coming male players are almost as intertaining as the ladies and definately play fighting chess!
3. If Kamsky could play with a World Championship qualifying match pending with Topalov; what was Nakamura's problem?

What I learned from listening to the commentary by GM Ashley, Shahade, and GM's in the audiance:
1. Buying "Opening Books" is a waste of time and money until you are rated 1800.
2. Playing "game 30" doesn't even count in their book!
3. There is not that great of a differance between you and I and the "chess professional". They do it for a living (money) and we do it for fun. But they make the same mistakes we do; even though they have more time to devote to the game.
4. The younger players are throwing the old guys a curve ball by not playing "standard openings"

This is an opinion piece and I'm sure that many of my readers will disagree with some if not all of my opinions; that's ok with me! If this piece provoked you into study, introspection, or the desire to challenge me to a rated game next meeting then I have done my job.

The Club needs more authors, please consider posting on the site. Contact me if you haven't received an invite.
at 2:38 AM 3 comments