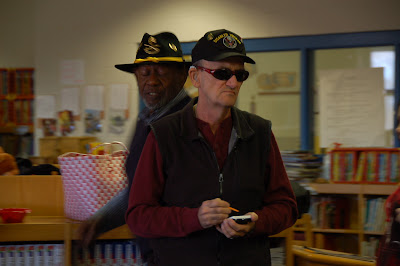 Tonight Dwight Roy and Matt Allen dropped by to check us out and play a few games.(Thanks to James Whiddon) While I was playing our visitors with help from Andrew Preston and Stephanie; there were several "Ladder" and "rated" games played.
Kerry provoked Johnny - Rated
Gelvic stunned Ernie - Rated
Andrew P. schooled Stephanie - Unrated
Johnny destroyed Gelvic - Rated

Welcome Dwight and Matt! Everyone looks forward to seeing both of you again!

It was good to see Andrew P. again; he has been "deployed" with the Red Cross helping our neighbors to the west who have suffered from tornado's and flooding. Just in case those poor souls were too distraught to say it...Thanks Andrew!

Added 8 June: Andrew e-mailed me that the stories he related to me Tuesday night were from a personal visit, not official Red Cross business. I do know that Andrew manned the Red Cross Shelter when Nelson and Bullit Co's had flooding problems...so my thanks still stands,
at 12:41 AM